Cast, Luan Gallery’s winter exhibition, is curated by Katriona Gillespie with the purpose of delivering a ‘Comprehensive look at the various manifestations of sculpture in Ireland today.’ The gallery’s spaces each hosts a strand of sculpture: traditional practice in the River Gallery, light sculpture in the New Gallery, and installation in the Library Gallery. While the genre review divides the work to forms of practice, the idea of sculptural materials and their relationship with organic matter is threaded throughout the exhibition, proposing a new way to consider contemporary sculptures. Overlooking the River Shannon, Gabrielle Sampson’s Hope resembles branches of seaweed and interwoven tree roots, giving the sense of an organic and flexible growth that has emerged rather than being installed on the gallery wall. The ceramic piece does not represent or aim to mimic its organic, submerged origin, rather questions material of sculpture versus that of a branched, wild growth. 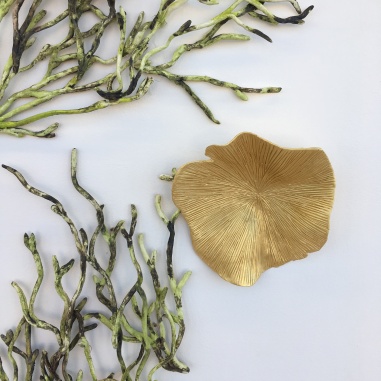 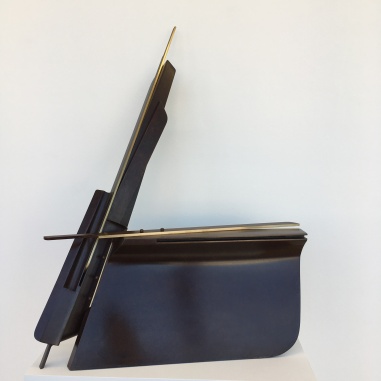 On the other side of the River Gallery space are three sculptures by Don Cronin. Two of the pieces are made of bronze, the third of bronze, resin, and pigment. The bronze pieces appear, on first view, to be made of mahogany laminate, put together from parts of pianos and string instruments. The third piece is painted white with rust emerging from the resin. The pieces provoke thoughts of movement and music and the softness of wood, question the substance of bronze, and whether materiality of human-made objects is diminished or enhanced. Cronin’s abstracts propose a new organic nature for bronze, and mark the material’s timeline through representing its decay.

A similar proposal of alternative timelines is made by Mel French, whose pieces misleadingly resemble classical marble torsos. Rather than approaching sculpture as a task of likeness, French’s sculptural work at Cast represents body, mind, and political state. The female torsos are functional and flawed; they existed in our world prior to being captured in marble. Tend’s breasts’ are bound by bandage, her posture restricted, and in Tend II the artist has added a row of nipples, enhancing the otherwise headless and limbless body’s functionality as a nourisher. Both pieces remain imperfect. The marble is impeccable but the bandages, nipples, and the flaws in the torso’s rolls of belly flesh tell the social story of an organism and frame the pieces as critical, political work.

The New Gallery space is lit by Kevin Killen and Martina Coyle’s artwork. Killen’s time-based neon light sculpture, Tipping Point, transmits the experience of a Belfast street into the dark gallery with a sequence of colours, flashes, and blinking lights. The intense red, green, and yellow control the ambient lighting and, not unlike Cronin’s work, reference movement. This, together with Infinity Studies: Monotony which traces the movements of housework being performed, situates Killen’s artwork away from the skillful manipulation of neon, and into an ephemeral nature of light, time, and retinal afterimages. Here, again, the physicality of organic actions is the core of the artistic action.

Sharing space with Killen’s neons are three faintly lit doors. Reseaux makes the centre of Coyle’s installation. This floor-faced French door frame made of water-filled silicone, lit by an overhead blue light, is surrounded by several other doors. Two of these are made of painted acrylic and door pushes, the other three are part of the gallery space, leading to unknown locations. This cloister-like placement encourages walking around the blue-lit, shimmering water door, observing the interplay between light and liquid, and imagining where a dip into the light might lead.

Finally, the Library Gallery holds the work of two interdisciplinary practitioners, both marking the organic through its boundaries. Cecilia Bullo’s METANOIA I is installed like a choreography danced around the idea of flesh. A video of a surgical demonstration starts the trip around the piece with views of metal piercing material and the tactile sound of flesh-penetrating sutures. Raised above eye level is a metal medical slab surrounded by motorcycle mirrors which allow a fragmented view of the split bone-resembling ceramic object and surgical pliers resting on it. While it is absent in the work, flesh is the primary concern of this piece. The accompanying quote by Antonin Artaud states ‘The Thing is reconstituted, the cicatrisation comes to it from the very gesture that wounds it‘. (1932) The ceramic bone, the idea of healing, and what is unseen, but believed to be there, all mark the presence of flesh in the narrative. It is the faith in the knowledge that the surgical act is not simply breaking or piercing, but also healing, that soothes the anxiety of the missing flesh. Bullo’s second piece, Amulet Assemblage, is a continuation to this question of belief, the bone-like objects carefully carried in a padded luggage, they are remnants of the trust in the process of healing the body they belong to.

The space is shared with Katherine Sankey’s Pet, Dredge, and Transposon. Large objects assembled from metal pipes and wooden branches adjoined by metal pipe elbows. The pieces are placed so that Dredge’s assembly grows into an organic-looking clawed creature, Transposon’s branches end in metal valves, and one of Pet‘s branches is lodged in a hole in the gallery’s wooden floor, possibly a root piercing through and penetrating the space. The accompanying video piece, Transposon II, is an abstract moving image piece showcasing its digital nature. With transposons meaning DNA sequences that result in mutations, this piece situates Sankey’s work as the final proposal posed in Cast, and makes an invigorating finale to the exhibition’s materiality story. In the relationship between reality and its artistic representations, sculptural forms have the advantage of materiality and allow a reflection through the practice on the organic matter that composes the world outside the gallery. Cast brings these exemplary pieces together to act as a proposal for the physical and social functionality of sculpture to relate to the organic through an artistic manipulation of material – be it made, found, lasting or ephemeral. 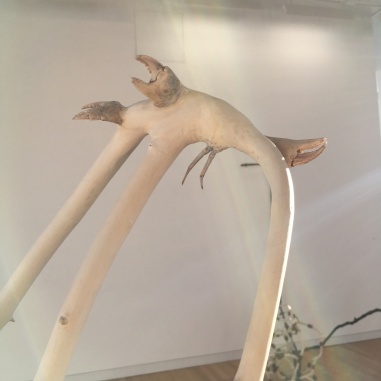 AICA Ireland promotes professional practice and exchange among the professionals who work in the area of critical discourse, stimulating research and reflection within the visual arts, education and culture.

#nonarnia is a humorous public, social media event that takes its premise from the literature of C.S. Lewis’s 1950 children’s series ‘The Lion the Witch and The Wardrobe’.

Since 2008, The Hollywood Forest Story tells how new-to-Ireland continuous cover forestry is transforming a small conifer plantation into a permanent, mixed species forest. Its one new story for Earthly wellbeing. Its also a story of the social power of eco-social art practice to foster ecoliteracy and agency for creative practitioners and their audiences.